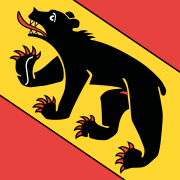 The flag of the Swiss Canton of Bern consists of black bear walking upwards on a yellow diagonal with a red background. The bear is one of the oldest symbols of the region, serving as their emblem, namesake, and mascot. The red and yellow colors are believed to have come from the Holy Roman Empire. This flag depicts Bern’s coat of arms and has been in use since the 14th century.