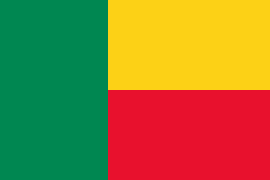 The flag of Benin consists of two horizontal bands of yellow and red on the right and a vertical band of green on the left. Yellow represents the savannas, green represents vegetation, and red represents the blood of those who fought for the country. This flag was first adopted on November 16th, 1959 when the region was the Republic of Dahomey. In 1990 the People’s Republic of Benin was established and the flag was changed, but this flag was re-adopted on August 1st, 1990.