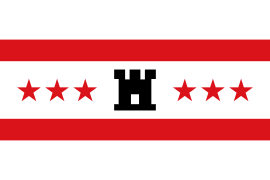 The flag of the Dutch province of Drenthe consists of a black castle and six red five-pointed stars in between two red bands on a white background. The six stars represent the six ancient regions of Drenthe and the castle represents the castle in the city of Coevorden, from which the Bishop of Utrecht maintained law until the 16th century. The colors red and white are traditional colors of the region and also the colors of Utrecht. Drenthe was the first Dutch province to officially adopted a flag on February 19th, 1947.