Flag of the Republic of Maryland 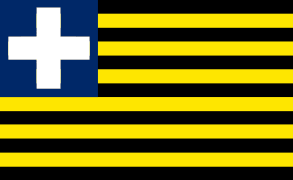 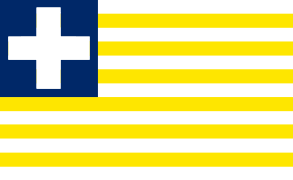 No, the U.S. state of Maryland did not break away from the Union. Not yet, at least. This is the flag of the African country the Republic of Maryland. The country was founded primarily by freed slaves from the U.S. state of Maryland, hence the name, and existed for a short period of time in the 1850’s. Consisting of 13 alternating black or white and yellow stripes with a white cross on a blue background in the top left corner, this flag was officially adopted in 1854, when the African country gained its independence, and was abolished in 1857, when the country became part of Liberia. While it wasn’t official until 1854, the flag was used since the 1830’s in the region. The two versions of this flag existed because the official description did not define the color of the non-yellow stripes. Many used white to match the Liberian flag, while others insisted on using black because yellow and black are colors of the of the U.S. state of Maryland.