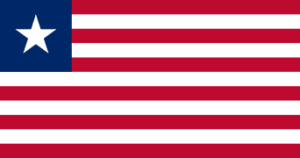 The flag of Liberia consists of eleven stripes of red and white and a white five-point star on a blue square in the top left corner. The eleven stripes represent eleven signatories of the Liberian Declaration of Independence. Red and white represent courage and moral excellence. The white star on a blue background represents Liberia as being the first independence republic of Africa. The flag purposely resembles that of the United States as Liberia was colonized by the U.S. and was founded by freed slaves from North America. This flag has a ratio of 10:19 and was adopted on July 26th, 1847.