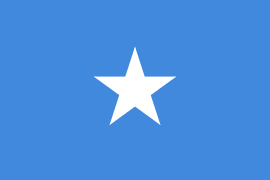 The Somali flag consists of a five-point white star in the center of a light blue background. The white star, call the Star of Unity, represents the Somali race’s origins. The blue background represents the sky and the Indian Ocean, but was originally chosen due to its similarity to the United Nations flag, who were instrumental in Somalia’s transition to independence. The flag was created by Mohammed Awale Liban and was adopted on October 12th, 1954.