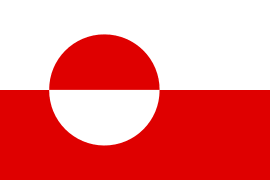 The flag of Greenland consists of two horizontal bands of equal height, white on top and red on the bottom, with a red and white circle. The red and white circle is slightly offset to the right and is split horizontally with red on top and white on the bottom. The white band represents glaciers, which cover more than 80% of Greenland, and the red band represents the ocean. The red top half of the circle represents the setting sun, and the bottom white half of the circle represents icebergs and pack ice. This flag was adopted on June 21st, 1985. Greenland is the only Nordic country or territory without a Nordic Cross on their flag.