Flag of the Kingdom of Greece 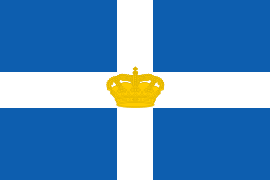 The flag of the Kingdom of Greece consists of a white cross on a blue field with a gold crown in the center. A similar flag was used when the Kingdom of Greece gained its independence from the Ottoman Empire in 1832, but the flag with a crown was first adopted in 1863 after the accession King George I. In 1924 the crown was removed only to be returned in 1935, until the flag was abolished when the monarchy of Greece fell in 1973. The crown represents the monarchy, which no longer exists in Greece. The colors blue and white, which represent the clouds and sea, are traditional colors for Greece and are still used on the the Greek flag.