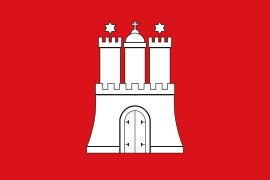 The flag of the German state of Hamburg consists of a white castle on a red background. The castle has three towers, the outside two with six point stars above them and the middle tower with a cross atop it. The cross and stars represent Christianity and the castle itself represents the defense of the Hamburg. The flag resembles the coat of arms of Hamburg and was first adopted on May 14th, 1751.