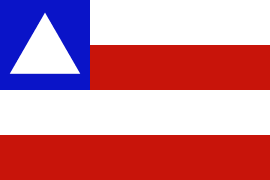 The flag of the Brazilian state of Bahia consists of four stripes, alternating between white and red, and a white triangle in a blue square in the top left corner. This flag dates back to slave uprisings of the late 18th century and was first officially adopted on May 25th, 1889. It is purposely reminiscent of the United States flag, as the American revolution had great repercussions among the Brazilian people in the 18th century.