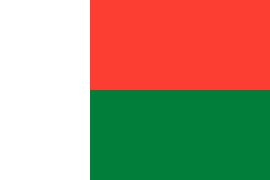 The flag of Madagascar consists of a white vertical rectangle on the left and two horizontal rectangles of green and red on the right. Red and white are the colors of the Kingdom of Imerina, who reigned over most of Madagascar from 1540 to 1897. Red and white also represent the Malagasy people, who are an ethnic group who represents a large majority of the population. Green represents the free commoners, known as the Hova, in the country. The Hova is the largest of three historical castes in Madagascar, the other two being Andriana, the nobles, and Andevo, the slaves. This flag was adopted on October 14th, 1958, two years before the country gained its independence from France.