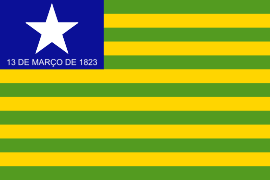 The flag of the Brazilian state of Piauí consists of thirteen horizontal stripes of alternating green and yellow colors and a blue canton with a white star and the words “13 DE MARCO DE 1823”. Yellow represents the mineral richness of the state and green represents hope. The white star represents the star named Antares, which is a state symbol of Piauí. The words “13 DE MARCO DE 1823”, which means March 13th 1823, represents the Battle of Jenipapo, a battle between the Brazilian Army and the Portuguese Army in the Brazilian War for Independence that occurred in Piauí territory. This flag was officially adopted on July 24th, 1922.