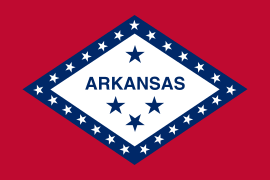 The flag of the U.S. state of Arkansas consists of a blue-bordered white diamond on a red background. On the white diamond stands four blue five-point stars and the name of the state, and on the blue bordered rests twenty-five white five-point stars. The white diamond represents Arkansas’ historic diamond mine, Crater of Diamond State Park. The twenty-five white stars represents the state being the 25th to join the U.S. One of four the stars is positioned above the state name in the white diamond, this star represents the state joining the Confederate States of America when it seceded from the United States of America. The other three stars are positioned below the state name, and these represent Arkansas being one of the three states in the Louisiana Purchase. Those three stars are represent the three countries the territory belonged to throughout its history: Spain, France, and the U.S. This flag was the winner of a contest in 1912 and was adopted on March 16th, 1924.