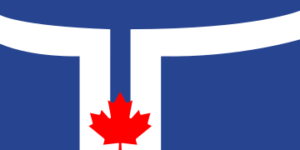 The flag of the Canadian city of Toronto consists of a blue background with two white parallel vertical stripes, slightly off center towards the left, that starts at the bottom edge of the flag but, before reaching the top of the flag, hits corners and sharply turns away from each other, in a slightly upward curved path, towards each side of the flag. At the bottom edge of the flag, between, but overlapping with, the two stripes lies a red maple leaf. The cornered stripes represent the Toronto City Hall and the red maple leaf represents the Council Chamber at the base of the towers. The blue background between the white stripes create the letter T, which represents the city’s name. A similar flag won a contest in 1974, this flag was adopted in October of 1999 when the city grew to include a larger region.