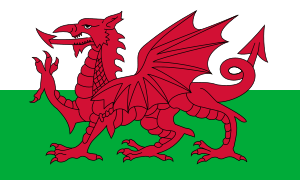 The Welsh flag consists of a red dragon on a white and green background. The red dragon comes from the dragon of Cadwallader, a king who reigned in northern Welsh region during the 7th century. Green and white are the colors of the royal house of Tudor. The Tudors also included a red dragon into their coat of arms to signify their Welsh descent. This flag was officially adopted as the Welsh national flag in 1959.