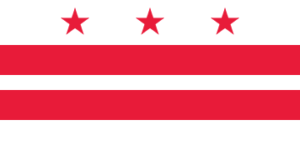 The flag of Washington, D.C. consists of three red stars and two red bands on a white background. The flag is based on the coat of arms of George Washington’s ancestral family and was used by George Washington himself. It is believed that this coat of arms inspired the stars and stripes of the United States flag. This flag was chosen by a public competition and was adopted on October 15th, 1938.