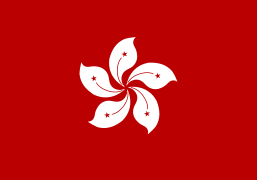 The flag of Hong Kong consists of a white orchid tree flower centered on a red background. The color red is a festive color in China, and is used to represent celebration and nationalism. There are five small stars on each of the five petals of the flower; these are used to represent the five stars on the Chinese flag. The flower itself represents harmony, specifically the harmony between the system of government in Hong Kong which differs from that of the country’s. The design of the flag was adopted on April 4th, 1990, and the flag was officially hoisted on July 1st, 1997.