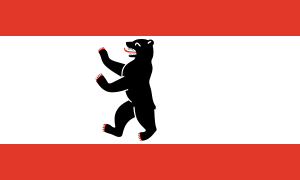 The flag of the German state of Berlin consists of three horizontal bands, two red and one white, with a black bear, standing on its hind legs with its paws extended, in white band. The two red bands are each one-fifth the height of the flag. The use of a bear is believed to be a play on the city’s name, Berlin, which is similar to the word Bärlein, which in German means ‘little bear’. The use of the colors black, red, and white dates back to 1861, in which the Berlin flag was a horizontal triband of those colors. This flag came in second in a contest in 1952 and, with the winning flag rejected by the state government, it was adopted by West Berlin on May 26th, 1954. It then became the flag of the entire state in 1990 when the two regions of West Berlin and East Berlin were reunified.