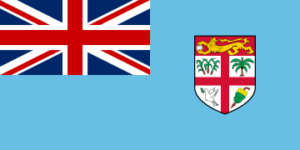 The flag of Fiji consists of a Union Jack in the upper left corner and the shield from the country’s coat of arms on the left on a light blue background. Blue represents the ocean and the Union Jack represents Fiji’s connection to the United Kingdom. On the shield is a sugar cane, a coconut palm, and a bunch of bananas, all representing common vegetations of the island. The shield has has a dove, which represents peace, and a British lion holding a cocoa pod, this also represents Fiji’s connection with the British Commonwealth. This flag was adopted on October 10th, 1970.