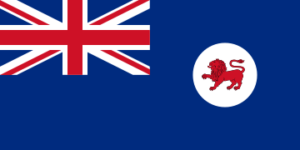 The flag of the Australian State of Tasmania consists of a blue background with a Union Jack in the upper left corner, and a badge of a red lion on a white disc on the right side. The Union Jack represents Australia’s connection with the British Commonwealth. The lion has historical ties with England, but it is unknown how it became a symbol of the region. This flag was adopted on September 25th, 1876.