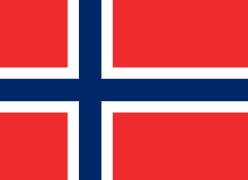 The Norwegian flag consists of a blue Nordic Cross outlined in white on a red background. The colors of blue, red, and white were chosen as a representation of freedom, which could be seen in the flags of France and the United States of America. The Nordic Cross, which represents Christianity, was used to follow suite with the other Scandinavian country flags. This flag was officially adopted on July 13th, 1821.

Sign up here to get Flagsplosion posts and updates via email