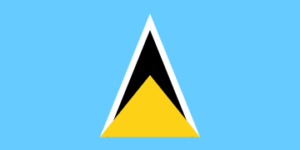 The flag of Saint Lucia consists of a yellow isosceles triangle over a white-edged black isosceles triangle on a light blue background. Blue represents the sky and sea, black and white represent the harmonious relationships between the races of the country, and yellow represents the sun. The two triangles represent the country’s twin volcanic hills, the Gros Piton and the Petit Piton. These two volcanoes are considered national symbols of Saint Lucia. This flag was adopted on March 1st, 1967.