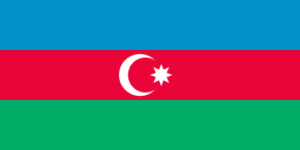 The flag of Azerbaijan consists of a horizontal triband of blue, red, and green with white crescent and eight-point star in the center. Blue represents the country’s Turkic heritage, red represents progress, and green represents Islam, the country’s predominant religion. The white crescent and star are typically considered representations of Islam, but there is disagreement on why an eight-point star is used. Some say the eight points represent the eight Turkic peoples of the country, while others point to the number of letters in the Arabic writing of Azerbaijan. This flag was originally used from 1918 to 1920, and was re-adopted on February 5th, 1991.