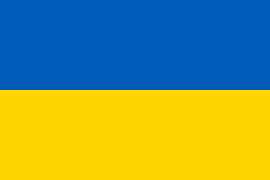 The Ukrainian flag consists of two horizontal bands, of equal size, of blue and yellow. Blue represents peace and the sky while yellow represents prosperity and the fields. These colors were first used in 1848 during a push for Ukraine to become independent. This flag was officially a national flag from 1918 to 1920, and then re-adopted as Ukraine’s national flag on January 28th, 1992.