Flag of the Federated Malay States 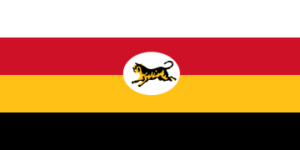 The flag of the Federated Malay States consists of four horizontal bands of white, red, yellow, and black with a Malayan tiger in a white oval in the center. This flag represented the coalition of four states in Malay under British protection: Selangor, Perak, Negeri Sembilan, and Pahang. The flag was introduced in 1896 and served as the flag of several different collections of Malayian states. The four colors of the bands were a reflection of the four main colors used in the individual state flags at that time, and the tiger represented the native wildlife of the area. This flag was abolished in 1950 when the collection of Malayian states increased, was renamed the Federation of Malaya, and a new flag was chosen to represent the region.