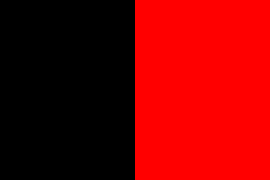 The flag of the Italian region of Aosta Valley consists two equal regions, divided vertically, of black and red. The two colors for this flag are taken from the Coat of Arms of the Challant family, who rose to power in the 12th century and ruled much of the Aosta Valley during the Middle Ages and Renaissance. While in widespread use beforehand, this flag as officially adopted on March 16th, 2006. 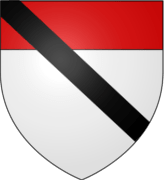