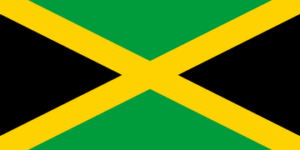 The Jamaican flag consists of four triangles, two black and two green, separated by a diagonal yellow cross. Yellow represents the sun, black represents hardships, and green represents the vegetation of the island. The design of this flag is loosely based on the Scottish and Irish flags, representing the roots of much of the population, but was adapted with Pan-African colors, representing the country’s majority black population. This flag was adopted on August 6th, 1962.