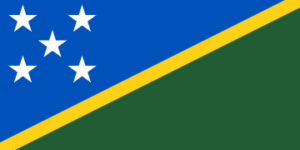 The Solomon Islands’ flag consists of blue and green regions divided by a yellow diagonal stripe with five five-point stars in the upper left corner. Blue represents the ocean, yellow represents the sun, and green represents the land. Originally, the five stars represented the five administrative regions of the country, and while the number of regions have increased since then, the number of stars on the flag have remained the same. This flag was adopted on November 18th, 1977.