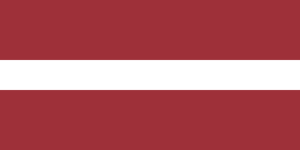 The Latvian national flag consists of a dark red background with a thin white horizontal band. The height of the white horizontal band is one-fifth that of the flag. There are many legends as to the meaning of the colors, one of those being that during a battle a banner was dipped in a sacrificial ram’s blood, the white band being where the flag was held as it was dipped. Another thought is that the red represents the blood shed by a wounded Latvian leader, and the white represents the cloth used to bandage the wound. While this or a similar flag has been used in Latvia since the 13th century, it was officially the national flag from 1923 to 1940, and was re-adopted on February 27th, 1991.