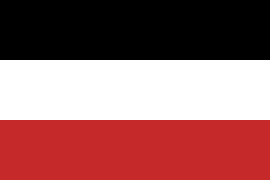 The flag of the Republic of Upper Volta, which existed from 1958-1984, consists of a horizontal triband of black, white and red. The colors represent the three main rivers of the country: the Black Volta, the White Volta, and the Red Volta. While having no affiliation, this flag is identical to that of the German Empire (1871-1918). The flag was adopted on December 9th, 1959 and abolished when the country became Burkina Faso on August 4th, 1984.