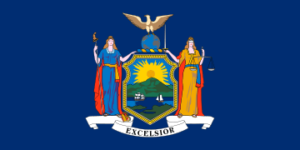 The New York State flag consists of the state’s coat of arms on a blue background. The coat of arms consist of two ladies standing on either side of a shield positioned above a banner and a globe and an eagle, which are located above the shield. The lady on the left side of the shield is named Liberty. She is holding a pole with a Phrygian cap atop and there is a crown at her feet. She is wearing a blue robe and red sandals with another set of red robes hanging from her shoulders. The Phrygian cap and crown are symbols of the Revolutionary War and freedom from the British monarchy. Liberty herself represents freedom and the pursuit of liberty.

On the right stands the lady named Justice. She is holding a sword in her right hand and a weighing scale in her left. She is wearing a blindfold and gold robes along with another set of red robes at her shoulders. The blindfold represents impartiality and the scales represent fairness, while the sword she is holding represents punishment. 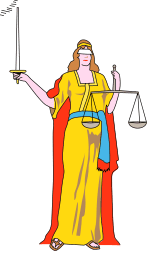 Between the two ladies is a shield, on the shield is a image of a three-masted ship and a sailboat on the Hudson River with a mountain range and a sunrise. These represent the commerce of the Hudson River. 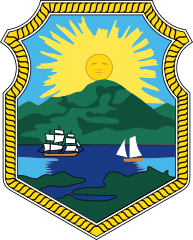 Below the shield is a banner with the word “Excelsior”, which means “ever upward”. Above the shield is a eagle surmounting a world globe, which represents the northern hemisphere. 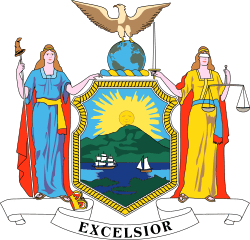