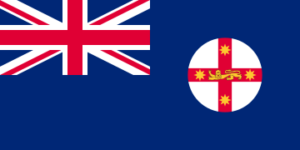 The flag of the Australian State of New South Wales consists of a Union Jack in the upper left corner and a badge, based on the region’s coat of arms, on the left side on a blue background. The badge consists of a white disk with a golden lion and four golden eight-pointed stars on a red cross. The Union Jack and blue background, known as Britain’s Blue Ensign, represent Australia’s connection with the British Commonwealth. As for the badge, the red cross represents the Cross of St George, the golden lion is derived from the Royal Arms of England, and the four eight-point stars represent the Southern Cross. This flag was adopted as the state’s official flag in 1876. 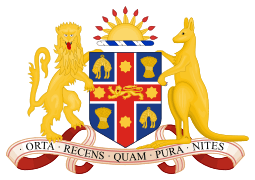