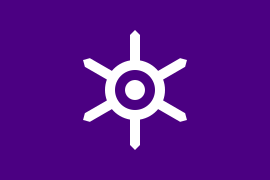 Tokyo’s prefecture flag consists of the Crest of Tokyo in white on a purple background. The white crest shows the sun with six rays and was officially adopted as the Crest of Tokyo on November 2nd, 1943, but dates back to 1889. The crest represents Tokyo as the center of Japan and is believed to be designed by Hiromoto Watanbe, Tokyo’s governor from 1882 to 1886. Purple, the background color of the flag, is a traditional color of the region of Tokyo. This flag was adopted on October 1st, 1964. Please note, this flag is for the administrative region (prefecture) of Tokyo and not the city of Tokyo, which has another flag.