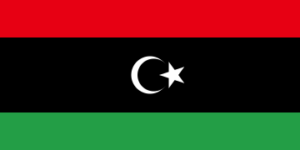 The Libyan flag consists of three horizontal bands of red, black, and green. The black stripe is double thick with a white crescent and five point star centered on it. The three colors represent the three major regions of the country, and the crescent and star represent Islam, the country’s major religion. This flag was first adopted on December 24th, 1951 and was used until 1969. It was re-adopted as the national flag on August 4th, 2011.