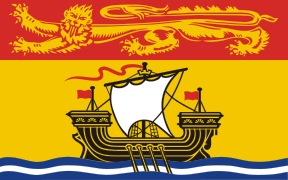 The flag of the Canadian province of New Brunswick consists of a golden lion across a red background on the top one-third, and a Scottish galley in water on a golden background on the lower two-thirds. The galley represents one of the province’s main industries throughout its history, shipbuilding, and the golden lion represents the province’s connection to both England and to Brunswick, Germany. This flag is modelled after the coat of arms of New Brunswick and was adopted on February 24th, 1965.