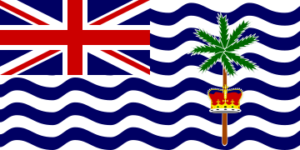 The British Indian Ocean Territory flag consists of the Union Jack in the upper left corner, six wavy blue lines separated by white, and a palm tree with a British crown about midway up the trunk. The wavy blue lines represent the Indian Ocean, the palm tree represents the natural vegetation of the territory, and the Union Jack and crown represent British possession. No citizens live in the territory this flag represents.