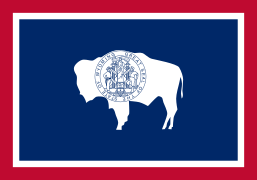 The Wyoming flag consists of the Great Seal of Wyoming centered in an American bison’s profile which, in turn, resides in a solid blue rectangle with an outline of white then red. The red represents the native Americans and the blood of the settlers, while the white represents purity and uprightness. Lastly, the blue represents Wyoming’s sky and mountains as well as fidelity, justice, and virility. The colors of this flag are the same as the national flag, the United States of America, in which Wyoming is an established state. This flag was created by Mrs A.C. Keyes and was ratified by the state government on January 31st, 1917.